Cellular Routers - the basics to get you in the know! 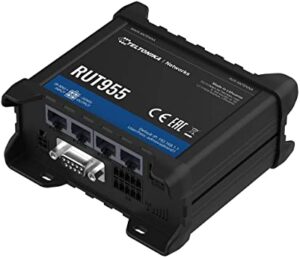 From a standard home internet connection to 5G to public WiFi, Internet users have many different ways of accessing the web available to them. Each of these options has pros and cons.

Cellular routers are a smart option for people who want to access high-speed Internet without needing to connect to a wall outlet or public WiFi network. This can be helpful for traveling, working remotely, using the Internet outside, or as a backup option for unreliable WiFi networks.

What is a portable cellular router?

A portable cellular router is a device that provides internet access to multiple devices in a network. It usually looks similar to a standard WiFi router, but doesn’t need to plug into a wall outlet or stay in one physical place. It may also have a screen to display information such as how much cellular data it has used. You can take a cellular router with you anywhere.

An integrated cellular router includes both a cellular modem and a router. The modem creates an Internet connection that the router then transmits to a network of devices. A cellular router provides an initial connection and corresponding WiFi network using cellular internet — the same kind used by smartphones and tablets.

How does a cellular router work?

Typical routers plug into a modem, which is in turn plugged in to a special outlet in the wall that leads to a network of underground cables. The Internet can also be accessed wirelessly through signals from cellular towers. This is how smartphones and other devices get internet service without needing WiFi.

Cellular routers allow multiple devices in a WiFi network to access the internet by connecting to cell towers instead of underground cables. This allows easy internet access on-the-go or in areas without accessible or reliable WiFi. This also makes it easier to sign many devices into the same WiFi while traveling without needing to sign in each device every time you connect to a new WiFi network. Some cellular routers can also be plugged into a wall outlet like a standard router, and only use cellular internet when cable internet is weak.

A router is a machine that allows a group of devices — like phones, computers, tablets, and more — to access the Internet through a single connection from the modem. It groups multiple devices into a single WiFi network with one internet connection, instead of needing a separate connection for each device.

2 Key functions of a Router regarding IP Addresses

As a rule, routers perform two distinct functions regarding IP addresses. An IP address is an identification number necessary for any device using the internet.

Standard routers connect to modems. A modem is the device that creates the initial Internet connection. Most modems are plugged into a wall outlet connected through a network of underground cables to large physical servers and data centers that manage much of the information on the Internet. The modem of a cellular router, in contrast, accesses the Internet by wirelessly connecting to cell towers, just like smart phones and tablets. Then, the router turns that wireless cellular connection into its own WiFi network.

Integrated cellular routers include a built-in modem that connects to a nearby cell tower to get Internet. Other cellular routers connect to an external modem or 4/5G-enabled device to provide Internet access.

How to set up a cellular router

The setup process for a cellular router will be different depending on its make and model. For most products, a data plan is necessary — just like purchasing a phone plan or Internet access for your home.

Many cellular routers automatically perform different parts of the setup process, like software operations. Some routers may require users to manually set up APN. This involves typing an IP address (which should be given by your internet service provider) into a browser window. Users may also need to create a new username and password to log into the router’s network.

With most cellular routers, you will need to point the antennas upward, insert a SIM card, and plug it into a source of electricity for it to work. Check an individual device’s setup instructions for more information.

How do WiFi and cellular internet work?

WiFi and cellular networks both provide internet access for computers, phones, and other devices.

WiFi creates a network out of several devices all using the same individual Internet connection, either from cellular data or a cable source. These networks can be public or private. Schools, restaurants, and other public places use public WiFi so that anyone can connect to the internet at those locations. However, they are easier to hack and riskier to use when handling important information online. Private WiFi networks are popular for use in homes, libraries, hotels, and other places where people want to keep their digital information private and protected.

WiFi is ideal when users need a high-speed Internet connection, are in a different country where they can’t use cellular data, or are streaming video and other high-bandwidth activities. WiFi can often be less expensive than cellular data.

Cell routers come in many different kinds, each with its own features and intended applications.

Radios, TVs, old phones, and other devices have external antennas that convert radio waves into electrical signals. Cellular routers like this model often have antennas for the same reason.

A router communicates with devices in a WiFi network through radio waves, too. The more antennas a router has, and the bigger they are, the faster and more reliable Internet it can provide, and the larger the area it can cover. Cellular routers can come with up to 4 antennas. While antennas increase connectivity, they also decrease portability and convenience.

You can also buy external antennas for a cellular router.

Ethernet cables usually provide a faster and more stable Internet connection than WiFi. However, they aren’t convenient when the user has to physically move around with the device. Most phones and other mobile devices don’t have ports for an Ethernet cable, so you will need to buy a separate adapter to connect them.

Most smartphones have SIM cards. A SIM (Subscriber Identity Module) card is a tiny removable computer chip inside a cell phone. It contains most of your phone’s information, such as your carrier (like Verizon or AT&T), text messages, and data usage rates. Without one, you wouldn’t be able to make calls, send texts, or use the Internet from a phone.

Many cellular routers include SIM card slots to access the Internet in the same way. They can include slots to insert a SIM card. You technically could insert your phone’s SIM card to your router. However, this isn’t ideal if you don’t have a phone data plan large enough to handle the typical traffic managed by the router.

Many phone carriers sell their own routers and SIM cards that only work with their networks For example, if you have an AT&T cellular router it will only work with an AT&T SIM card, and you can only get Internet service where AT&T service is available. Other cellular routers and SIM cards may be able to get service from multiple carriers depending on which is stronger in your particular geographical area. These multiple-carrier routers are often described as “unlocked.”

A VPN (Virtual Private Network) is a system that helps you protect your digital information while you’re using the internet. VPNs shield your individual IP address with another randomly-generated address, making it seem like you’re using the internet from the random IP address’s physical location. This makes it harder for other people using the same public or private WiFi network to find you and access your data. This data can include your web search history, physical location, the devices you’re using, emails and documents, and other sensitive information.

If any device has Power Over Ethernet (PoE), the same plug and cord provide both an internet connection and a power connection to that device. Otherwise, you would need to plug it in to both a router and a power source. For example, many closed-circuit security cameras have PoE to save energy costs and allow for easy movement.

Certain cellular routers have PoE in their Ethernet ports. You can also purchase external PoE adapters to plug devices into the router. PoE can be a helpful feature for smart home devices like lights and cameras, especially when those items aren’t near a power outlet. PoE capability can also help save power costs for using those devices. They would only need one cord for both power and WiFi connection to the cellular router, instead of using a separate cord for each.

Why Would a Cellular Router be Useful?

Cellular routers are helpful to have at home. They usually require less work and money to install than standard WiFi routers. They can also be handy as a backup if your usual WiFi network stops working properly. If your internet is down and you're working from home, a cellular router for home can be a real life-saver.

Some rural places don't have the necessary infrastructure to access high-speed internet. Cellular routers can be a viable alternative to dial-up or satellite internet for people living in these remote areas.

Cellular routers are one of the best ways to access the Internet while traveling. This is true for both personal and professional use.

Using the Internet on long trips, especially in a car, boat, RV, or while camping, can be much easier and more reliable with a cellular router. Many people in the same area, like a campground or on a boat, can use the cellular router’s WiFi network with more flexibility and speed than with a phone hotspot or cellular data. If you’re camping with many people, a cellular router ensures that everyone will have WiFi.

Cellular routers are helpful for professional work, too. If you are somewhere with public WiFi but want to protect your emails and other documents, a cellular router is a crucial  tool to work securely from anywhere. If you’re using the internet in an area without public WiFi, a cellular router can establish the stable private connection you need.

Cellular routers are crucial tools for emergency medical technicians and medical care teams who are constantly traveling on ambulances or other vehicles.Cellular routers can also be a good fit for jobs such as construction, mining, food truck management, and other outdoor, remote, or on-the-go work. Some cellular routers are also designed to withstand harsh weather conditions.

Are you ready for more information on cellular router? Check out or Cellular Router FAQ's.